As a member of the West Virginia House of Delegates Chris will fight for a more business-friendly state.  This includes advocating for a more simple tax code, lower taxes, and getting rid of regulations that hurt business or do not serve the public interest.

Chris believes solving the drug crisis is necessary for West Virginia’s economy to move forward.  In the House of Delegates he will advocate for policies that will help solve the drug problem our state faces.

Chris is a strong advocate for our public schools.  Our students deserve a world class education, and with the right policies this can be achieved.  Chris supported the public employee raise passed during the 2018 legislative session.  Chris believes we should work to pay our teachers as much as possible.  Chris will work to keep health care costs down, including those our public employees face.

Chris learned the value of hard work and commitment to his community from his parents, who worked for West Virginia public schools for most of their life. 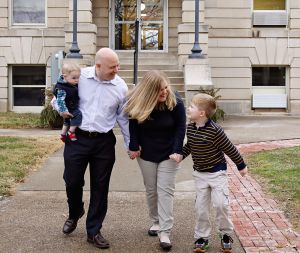 Chris met the love of his life, Kelly Pritt, while both were attending law school.  Kelly is a native of western New York in the Buffalo area.  When Chris asked Kelly to marry him she knew Chris wanted to return to West Virginia to make a difference.  Kelly loves West Virginia and is proud to call it home.  Kelly is particularly interested in the Right to Life movement, and she is strongly pro-life.

Chris and Kelly have two children, Jackson and Owen.  Jackson is 8, and Owen was born in June of 2017.  Since Owen was born Kelly has stayed home with him, and Chris has concentrated on continuing to build their successful law practice.  The Pritts are Christians and raise their children in a Christian home.

In his free time Chris enjoys studying the Constitution, enjoying the outdoors, and spending time with his family.

If sending a donation please make the check out to “Chris Pritt for West Virginia.”

Contributions to Chris Pritt for West Virginia are not tax deductible for federal income tax purposes. Individuals and PACs may contribute $1,000 for both the primary and general elections. Corporate contributions prohibited.  State of West Virginia public employees may not donate. West Virginia law requires that all contributors must provide their name, address, occupation, and name of their employer if the contribution is for more than $250.

You can also fill out the form below if you have any questions for Chris.